Royal children are always either good or bad.

Harry is Harry the Red, a wild child who gets to date women from all over the planet and jump out of planes in the safer parts of global trouble spots while William explores hair tonics and stays up beyond his bed time to greet Obama.

Their uncle Andrew was known as Randy Andy and got married to toe sucking Fergie while father Charles had to knuckle down and marry the impossibly unsuitable Diana purely to make sure the children that followed did not carry the genes of rebellion or hemophilia.

But this started a while ago. In fact, Charles’ grandfather George was also the better of the royal offspring, quietly tending to wife, daughters and speech defect while elder brother Edward became king and then proceeded to fall in love with the ghastly Wallis Simpson.

But of all of these, the most tragic of the royal reprobates was possibly Elizabeth’s sister Margaret. While Elizabeth was a dutiful daughter whose worst act of defiance was marrying Philip of Greece and Denmark, Princess Margaret was the one with boyfriends including Jagger, David Niven and cricketer Keith Miller, friendships with shady millionaires, a chain smoking habit and a liking for men who were often much older than her. Her marriage to photographer and commoner Antony Armstrong-Jones was such a scandal at the time that none of Europe’s crowned heads attended, except for the Queen of Denmark. Sadly, that ended in divorce in 1978. 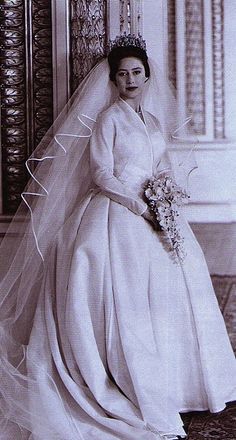 Margaret in a Norman Hartnell dress at her wedding.
(Internet sourced image)

Wild child or not, she certainly made a beautiful bride at their marriage on this day in 1960. Years later, her daughter-in-law would pay tribute to her by wearing a similar dress by the same designer when she married Margaret’s son David in 1993.

This entry was posted in Style and tagged Princess Margaret wedding dress. Bookmark the permalink.

1 Response to When Margaret married Antony

tell your stories, love your life