Calcutta and its changing face

Calcutta’s street and suburb names still hold traces of its past when people practicing a specific trade stayed with others doing the same. Thus you would go to Kumortuli for the kumor or potters, Colootolla for the coloo or oil press owners, Goalpara for the goala or milkman, Domtolla for the dom or scavengers/people who disposed of dead bodies. The butchers lived in Cossaitolla, the metal workers in Kansaripara, the tailors in Dorjipara and the carpenters in Chutorpara. Some of these names persist, while others have now been gentrified with names that fit the ambitions of their current inhabitants or a growing list of dead luminaries.

Today the area of Murgihata is no longer exclusively peopled by Portuguese people as it was in the early days of the city nearly a hundred and fifty years ago. They were the only people who kept and sold poultry or murgi. Murgihata also has a Greek cemetery with graves dating back to 1777 and a Jewish cemetery that was built in the early 1800s. But the number of Portuguese was always more than the number of Greeks. The Greek cemetery is near the Phoolbagan crossing, a reference to a flower garden at the place perhaps?

To finish off and partly to explain what brought this on, names such as Ballygunje where I lived during my days in Calcutta and Tollygunje derive the ending of their names from the Hebrew word ‘geniza’ which passed first into the Persian and became ‘gunje’ before entering Bengali. Geniza meant storehouse of documents and gunje meant simply storehouse. So says author Amitav Ghosh. My old street has also been renamed; from Broad Street to Ustad Bade Ghulam Ali Khan Sarani although I don’t think that is an honour befitting the great vocalist’s stature given the narrowness of the road and the spectacular potholes along its length.
There, now I am done. 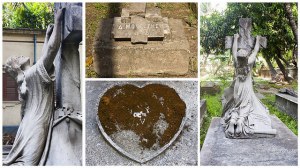 1 Response to Calcutta and its changing face