Calcutta falls to the British in 1757 on this date

2nd January, 1757: The British take Calcutta back from Nawab Siraj-ud-daulah who had been holding the city since June 1956.

The young Nawab had succeeded his grandfather Alivardi, a British sympathiser. He was angered by their refusal to stop adding to Fort William in Calcutta, ostensibly against the French. He marched on the British with an army said to have 50,000 men, 500 elephants and fifty cannon. 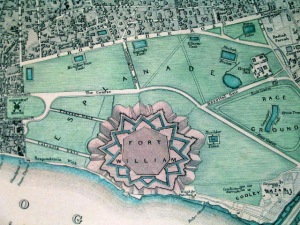 The governor, many of his staff and most of the British residents escaped to the ships on the Hooghly river and sailed to Falta, leaving women and children behind and a garrison of only 170 English soldiers to defend the fort under the command of John Zephaniah Holwell, who had been responsible for collecting taxes and law and order. He wrote an account of The Black Hole of Calcutta tragedy the following year. It is now accepted even by the British that Holwell might have been carried away by his patriotic fervour and a wish to make himself appear blameless. It is almost certain that Siraj knew nothing of where the prisoners were being housed.

The defeat at Calcutta caused the Company to suffer losses of an estimated 2000,000 pounds. Soldiers could be replaced; there was always more cannon fodder in the wings but the Company would be hard pressed to make good the revenue it had lost as a result of losing Calcutta. Siraj would have to be punished.

This would happen a month later in February 1757, when Clive defeated Siraj in a mango grove at Plassey with the help of the traitor Mir Jafar. This marks the end of Mughal rule in India and the beginning of the British period in our history.